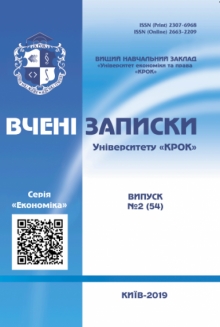 In the context of global transformations, in view of the growth of international economic cooperation, the increase in its participants and the intensification of competition, the need for a universal mechanism for operational coordination and settlement of various, sometimes diametrically opposed, economic interests of states appeared. The functions of such a mechanism in modern international practice are carried out by economic diplomacy, whose tools are successfully used to overcome the barriers to international trade, resolve disputes and weapons market, adhere to the terms of contracts, and provide all sides of international economic relations with as symmetrical information as possible. The article substantiates the fact of systematic influence of instruments of economic diplomacy on the intensity of international trade and investment flows and, accordingly, on a number of components of economic security of the state. In particular, as a result of the correlation, regression and dispersion analysis of pre-assembled and systematized primary empirical data carried out with the use of a multiplicative model, a direct positive correlation was established between the operation of instruments of economic diplomacy and the main indicators of foreign economic activity of Ukraine (export, import, FDI). The revealed link is statistically significant. This fact may indicate the direct influence of the political-diplomatic component on the external economic and investment-innovation components of Ukraine's economic security, as well as the indirect influence on other components, which should substantially adjust the overall integral index of the level of economic security of Ukraine. That is, the first step in the scientific understanding of the nature and degree of influence of instruments of economic diplomacy on the level of economic security of the state. This scientific problem requires further research, but today, based on the results obtained by the authors, it is possible to justify the necessity of making a political and diplomatic component to the Methodology of calculating the level of economic security of Ukraine.