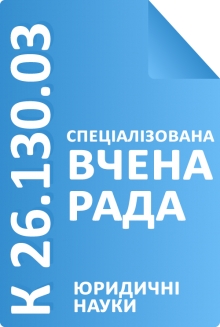 Buromenska N. L. The concept and legal nature of the principle of prohibition of abuse of rights - Qualifying scientific work on the rights of the manuscript.

The Thesis of the Candidate of Law Degree by specialty 12.00.01 «Theory and history of the state and law; history of political and legal doctrines». – University of Economics and Law «KROK», Kyiv, 2021.

Based on the results of the dissertation research, the author's provisions are formulated, which are submitted for defense and contain elements of scientific novelty. In particular, the position on abuse of rights as an illegal act is substantiated, as the rule of law is implemented contrary to its purpose and in order to achieve an illegal result, which is usually accompanied by harm to the rights and interests of another person or society. In this context, the abuse of a person's rights consists in the selfish, unfair use of the law without observance of the principles of law, in particular the principle of good faith, reasonableness, rule of law, prohibition of abuse of rights. The paper proves that the abuse of law as a legally significant behavior of a person endowed with subjective rights is facilitated by the imperfection of legislation, low legal culture and the dominance of the rule of law over the rule of law. Emphasis is placed on the systemic nature of the harmful consequences of abuse of law, which harm the role of law as a social regulator in general. The opinion is expressed that the main way to prevent abuse of law is strict adherence to the principles of law as the basis of any lawmaking, law enforcement and the rule of law. The dissertation establishes the main features of the principle of prohibition of abuse of rights and formulates its definition

It is concluded that the most important way to combat abuse of law is enshrined in the Constitution of Ukraine and acts of sectoral legislation, as well as compliance with the general principle of prohibition of abuse of rights by legal entities, so in each case the actions of individuals should be assessed. regulation, as well as the situation, consequences, real intentions and attitudes of the person to their actions, which have signs of abuse of rights.

A number of amendments to the acts of national legislation have been proposed in order to protect against abuse of rights, to prevent negative consequences from the implementation of actions aimed at abuse of rights.