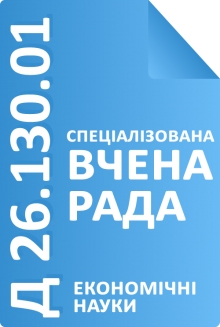 Rumyk I.I. The food security in the context of the complementarity of the national economy. – The manuscript.

A thesis for the Academic Degree of Doctor of Economic Sciences in specialty 08.00.03 – Economy and Management of the National Economy. KROK University. Kyiv, 2020.

The theoretical and methodological bases of the study of the problem of food security are substantiated іn the dissertation, an analysis of scientific papers on the evolution of approaches to the concept of «food security» is carried out, its elements are structured. A comparative analysis of the theoretical and methodological approaches of the main scientific schools to consider this issue has been carried out. A modern understanding of food security as a global problem that has a global character and affects all aspects of society is defined.

The classification of methods of economic studies of food security is systematized. The necessity of choosing special methods of situation analysis and predictive assessment is substantiated. The specificity of the functioning of agriculture in modern conditions is determined. The socio-economic parameters of food security are investigated. The methodological approach to justifying the complementarity of food security in the national economy has been improved. The signs of complementarity of the mutual development of agricultural producers, rural territorial communities and rural areas are identified.

The methodological approaches to determining food security are analyzed. The international food security assessment methodologies are developed. A SWOT analysis of food security was carried out, its strengths and weaknesses were identified. A lack of balance in the nutrition of Ukrainians and an extremely high share of food expenses were revealed.

It is established that theoretical and methodological approaches to the study of food security should be based on two general scientific approaches such as systemic and integrated. A new methodological approach to assessing the food security model of the national economy based on multicomponent scenario analysis using cognitive FLC modeling is proposed. The impact of the specified components on the model’s security is assessed and its parameters are optimized.

The paradigm centricity of food security is proved. The postulates of food policy paradigm are formulated. A qualitatively system of strategic principles of development was determined on which it should be implemented and based. At the methodological level, the basic impulse components of the food transmission are defined.

An improved methodological approach to assessing food security by calculating the integral coefficients for individual food products is proposed. A comprehensive assessment of the food security of Ukraine and the five pilot regions using a ball-oriented approach was carried out. The five-component integral indicator of the level of food supply is calculated. The main parametric criteria level of food security of the country as a whole and individual regions is defined. The assessment of agricultural production using the tools of economic-mathematical descriptive modeling is evaluated. The model for normality of distribution using the compliance tests Kolmogorov-Smirnov, Anderson-Darling and modified test of Kolmogorov-Smirnov is validated. The more statistical tests is a quadratic model, based on which the projected volumes of production of agricultural products per capita per year, is proved. Using the Statgraphics XVII Centurion statistical data analysis software package, a multi-factor model is constructed, the presence and type of relationship between independent variables is verified and established. A predictive multi-factorial regression model of the relationship of food security components is built. An ANOVA analysis has been carried out.

The necessity of building food balances is proved. At the methodological level, a methodical approach to optimizing food balances based on the standardization of their formats is proposed. The coefficients of self-sufficiency and import dependence for three types of products are calculated. The methodology for conducting a socio-economic study of the level of food security of the population (FIES) for use in Ukraine has been adapted. The statistical analysis of the relationship between export and import of agricultural products and the level of agricultural production using the Multiple Variable Analysis has been carried out.

The necessity of developing a scientifically based food supply strategy based on the investment and integration development path is substantiated. It is proposed to solve the problem of optimal distribution of food by integrated logistics structures through the system of wholesale food markets. The Concept of creation and development of wholesale food markets (hubs) was developed. The world models of financing the agricultural sector are investigated. The implementation of the National food strategy to achieve socio-economic parameters is justified. The model food security strategy whose goal is achieving the vision of a future food security, is developed. According to implementation the strategy, the necessity of the adoption of the new Law on food security is proved.