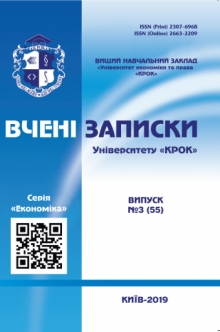 B. Odyagaylo, doctor of economics, professor, professor of the department of foreign trade and logistics, "KROK" University, Kyiv

The article shows the importance of innovative factors for obtaining economic benefits, substantiates the need to develop conceptual foundations for efficient use of the innovation system in the economy of the European Union. This condition is determined by many indicators and indicators and requires economic justification and scientific analysis. In addition, it should be borne in mind that this is one of the important components of the concept of the national economy, among others - political, social, informational, environmental and others. The global economic crisis has confirmed that competitive enterprises in crisis are those industrial enterprises that actively use innovation in their activities. Because in countries with high economic and innovative development, it is the introduction of innovation that is an important factor in ensuring stable long-term economic growth. Back in the late 1990s, EU experts identified eight areas of scientific and technological development that were identified as paramount to ensuring socio-economic progress in the countries of the community. The Lisbon Strategy for EU Development, adopted in 2000, aims to build by 2010 the most competitive dynamic knowledge-based economy. The end result of this strategy was to achieve record-high economic growth, the fullest possible approximation to full employment and social justice. However, as early as 2005, the Council of Europe considered the results of the Lisbon Strategy for 5 years and found that it had not been implemented. The European Community concludes that the importance of social problems is extremely important and their resolution makes it possible to achieve economic goals. The renewed Lisbon Strategy focuses on knowledge, innovation and the optimization of human capital. Є The goals are to create jobs in the EU and to boost economic growth through investment in human capital. In 2007, the paper "Scientific Europe in the Global World" identified the main areas of social life that are expected to be the most in demand for R&D and, accordingly, the contribution of science and new technologies to 2020: employment in a globalized world; health, nutrition, climate change, sustainable growth and the environment. Therefore, European experts have proposed a new concept of "key technologies" - as technologies that are able to answer above all the major social challenges, the solutions to which are the basis of economic transformation. In return for these goals, the new 10-year Strategy 2020, which emerged in the post-crisis era, aims to achieve employment, productivity and social cohesion. In order to specify the objectives of the 2020 Strategy, the EU identifies 7 priority areas of activity, which aim at combining the solution of economic and social problems. Economic growth remains the key task, and in the social plane, the objectives of the 2020 Strategy cover a wide range of problems.